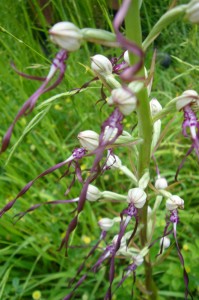 It’s early June and my cousin Rick and his wife Sara are here in Italy, soaking up the culture, sights, sounds and rays in deepest Le Marche. They are both keen birders, bird-watchers or ornithologists and also seriously into flora and in particular wild flowers.

On previous days they took self guided expeditions to the Piano Grande, Pian di Ragnolo 20 minutes away in the Sibillini National Park and  also into the Monti Azzurri foothills around Sarnano. 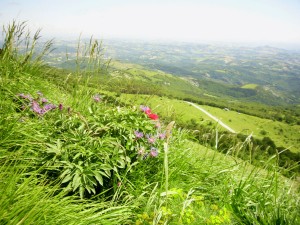 Despite having detailed wild flower guide books and other reference material, they felt that they wanted some local knowledge on the flora, fauna and the geography in the Sibillini Mountains.

So we contacted Giorgio a friend of a friend and an authorised CAI (club Alpini Italiani) guide for the Sibillini Mountains. Giorgio has in-depth knowledge of the local wild flowers, the wildlife and some hidden spots off the beaten track; which turned out to be treasure troves for the rarest types of floribunda. 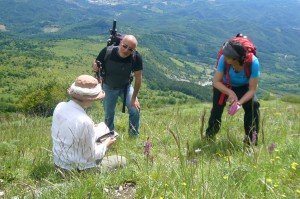 After an early meet for coffee and delicious cakes at Bar Belli in Amandola, we drove up to Campolungo and the refuge at Monte Amandola, taking the path to the left of the Rifugio we headed steeply up Monte Amandola.

Rick and Sara were immediately blown away by incredible beauty and vast array of flowers, on the slopes we encountered Bertolini’s Ophrys a delicate purple flower not too dissimilar from a Bee orchid. Then, further on, in woodland we came across a number of Bird’s nest Orchids. 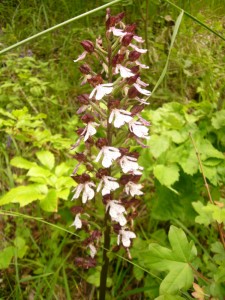 The pastures were home to pale orchids and early purple orchids, bright cyclamen pink wild peonies mixed  with violet and pink Centaurea Montana as if someone had landscape gardened the whole mountain. The Fragile looking Snake’s Head Fritollary with its green and lilac dapples, white Asphodels in abundance and pheasant eye daffodils.

Giorgio searched in fairy circles and found wonderful edible wild mushrooms and puffballs and as we ascended the 1800 metre peak, the views of Lago san Ruffino, Sarnano, Amandola and the arable Le Marche  patchwork stretched out before us, all the way to the Adriatic coast.

At the summit we were given locally baked cookies by Elisa, Giorgios knowledgable assistant, and were offered the option to descend via the dramatic Valle del’ Ambro. However, we decided on a quicker descent in the hope that we could find other floral gems. 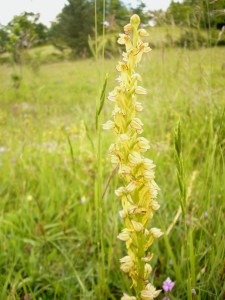 Giorgio didn’t disappoint, taking us to fields and woods near Giamparetto and Vidoni where we were amazed by incredible specimens of the impressive  lady orchid with its gossamer lilac and purple flowers, the yellow “man orchid”; which seems to be made of hundreds of parachuting little yellow fellas .

A mile down the road, we found numerous bee orchids which look just like a bumble bee, the male apparently tries to mate with the flower whilst the flower gets its own back for this unwanted copulation, by rubbing pollen on the bees back.

Finally, we saw a field of the absolutely gorgeous Adriatic lizard Orchids, with its multitude of flowers that unfurl purple lizard like tongues.

I haven’t attempted to list all of the flowers that we saw, as most of the meadows were carpeted. But if you are a botanist or wild flower lover, the finds and specimens here in le Marche in late May and June are unrivalled. Rick and Sara had previously made similar trips to Northern Italy, the alps and French Pyrenees but commented that Le Marche’s Sibillini mountains surpassed them all.

If you want to come here on a wild flower holiday, just contact us. We can suggest numerous itineraries and can hook you up with English speaking guides who are experts in the local flora.