Arctium Lappa is ofund on waste ground and also found in meadows and woods.

Burdock is is a BIENNIAL growing to 2 m high (6ft) by 1 m wide (3ft 3in). It is hardy and is not frost tender. It is in flower from June to September, and the seeds ripen from Sep to October. The flowers are hermaphrodite (have both male and female organs) and are pollinated by Bees, lepidoptera, self.The plant is self-fertile. It is noted for attracting wildlife 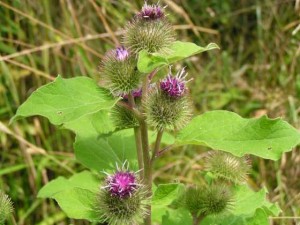 These can be eaten raw or cooked. Very young roots can be eaten raw, but older roots become fibrous and are normally cooked. They can be up to 120cm long and 2.5cm wide at the top, but are best harvested when no more than 60cm long. Old and very long roots  become woody. Although it does not have much flavour the root is mild and can absorb other flavours. Older roots become stronger in taste. The root is white but discolours quickly when exposed to the air. Roots can be dried for later use. They contain about 2.5% protein, 0.14% fat, 14.5% carbohydrate, The root contains about 45% inulin; a starch that cannot be digested by the human body, and thus passes straight through the digestive system. In some people this starch ferments and causes wind.

Young stalks and branches can be eaten raw or cooked and are similar in use and flavour to asparagus. They taste best if the rind is removed. The leaf stalks can be parboiled or fried and the pith of the flowering stem can be eaten raw in salads, boiled or made into confections

Burdock is one of the foremost detoxifying herbs used Chinese and Western herbal medicine. The dried root of year old plants is the official herb, but the leaves and fruits are also utilised to treat conditions caused by an ‘overload’ of toxins, such as throat and other infections, boils, rashes and other skin problems. The root is thought to be particularly good at helping to eliminate heavy metals from the body. The plant is also part of a North American formula called essiac which is a popular treatment for cancer.

Care should be taken if harvesting the Burdock seed in large quantities as the tiny hairs from the seeds can be inhaled and are toxic. Can cause allergic reactions. Contraindicated during pregnancy