US visitors in search of their Italian roots

Emigration from Italy to Ellis Island 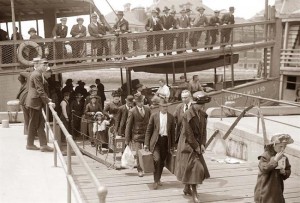 In the late 19th and early 20th century, great numbers of Italians fled famine and poverty and emigrated to the US via Ellis Island in New York.

Go to any comune in Italy and the records will show births, but will be missing the marriages and deaths for anyone who left the country. Check the the period 1876 to 1900 and you will find 5 million blank spaces for Italian emigrants (many of these travelled North into Europe), the period from 1900 to 1914 saw 9 million more people leave Italy and most of them departed for the USA.

US citizens visiting Italy to find their roots

We have had various guests who have visited Sarnano and Le Marche to research their ancestors. Some have gone to great lengths researching their family trees and ancestry, others appear with a few notes scrawled on the back of an envelope. Some have been lucky and found the family they never knew existed and others found an aunt of 96 that they last saw in 1950! and that they didn’t know was still alive.

Naturally, these sons and daughters of Italian immigrants in the US wonder why their forefathers would have left such a beautiful place. The records show that the Italian population was booming in the late 19th and early 20th century, but their industrial revolution was too late to speed up agricultural processes in order to meet the rising demand for food, poor crop yields in many years also hastened the exodus until the first world war.

This video of a couple’s trip to Tuscany, Umbria and Marche includes their stay in Sarnano. They visited Villa San Raffaello and  Sarnano as it was the home town of Vaughn’s father, who emigrated to the USA via Ellis Island in 1905 after severe famine. Vaughn was reluctant to investigate his ancestry but I insisted that, having come all this way, he must! I provided the telephone directory and started asking questions around town.

Sarnano Comune were really helpful in tracking down their relatives. We went to Sarnano commune with a family tree to find the details of the family, the problem was that all of the siblings of Vaughn had emigrated or died so the Comune performed a wider search for the surname Senarighi and found that there were a few families with that name. We started in Vecciola (see 4.03 in the video) a frazione of Sarnano and initially it seemed that that they were unrelated, but after chatting for haalf an hour we discovered that they had the same great grandmother and were in fact cousins. It was a really lovely moment, particularly for Vaughn and his wife Maria!
The comune also helped us to discover what had become of the 6th child, a sister. They couldn’t work out what had happened to her, knowing of her existence but nothing more. The records showed that sadly she had been stillborn.

The majority of the rest of the video shows, Tolentino, Ascoli Piceno, Urbisaglia and other itineraries around our wonderful local part of Italy. If you fancy visiting the wonderful area of Marche and staying at our Villa, we have spacious apartments that have been awarded tripadvisor’s excellence award for 3 years running.

Oh and the fig and lemon tart in the video was made by me and was quite delicious, even if I do say so myself.