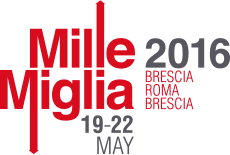 The world famous Mille Miglia (1000 mile) Italian motor race road tour and time trials play an important part in the historical and cultural landscape of Italy, a country enamoured by the style and speed of the thoroughbred motor car.

This year’s race will travel once again through the beautiful Macerata province in May 2016 and will include over 400 vintage cars that include 60 Ferraris and 60 Mercedes, including many 300SL gull-wing models from the 1950s.

What is the Mille miglia 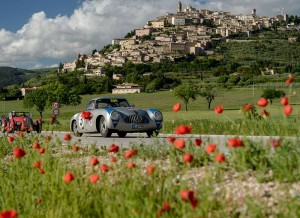 The current day Mille miglia is the 34th annual homage to the original race that was run from 1927-1957. It is a vibrant and stylish travelling showcase of some of the best and most glamorous motor cars ever built and this year’s race will be held May 19 to 22 2016 from Brescia to Rome and back and will draw participants and their cars from across the globe.

This international cavalcade will include over a hundred motor race crews, about 1,500 international media, TV and radio representatives and hundreds of other cars and enthusiasts.

The Race route through Le Marche 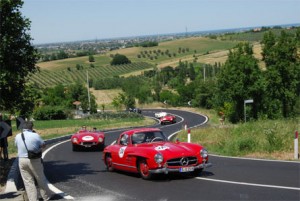 Macerata automobile club have battled hard to host part of the second Rimini-Rome stage on Friday 20 May when drivers of the Mille Miglia will cross Marche region from north of Recanati along the SP78 highway through Macerata  and back to Civitanova Marche and on via San Benedetto and Rieti to Rome. Here are the rough timings for each stage

Macerata province had been crossed by the first 11 editions before the war, from 1927 to 1937, during the return journey from the capital prior to reaching the Adriatic coast and driving north to the Po valley.

Last year the drivers took a slightly different route and the chicane set up at historic Sarnano provided the most wonderful photo opportunity with highly polished vintage beasts purring against a backdrop of medieval terracotta and the Sibillini Mountains. Please see the photos from last year below.

The vehicles participating in Mille Miglia 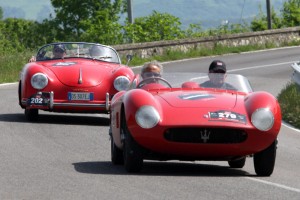 The vehicles allowable have to be marques that took part in the original Mille Miglia Race when it was originally run between 1927 and 1957, there are a maximum 450 vehicles and of these 30 vehicles will be placed in a “Special List”.

The automobiles will be divided into the following categories and will race against each other over a number of heats that span the 1000 miles: 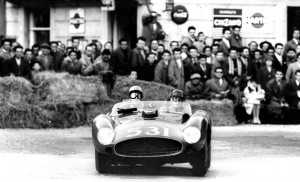 The Automobile Club of Macerata have strong links with the famous Scarfiotti motor racing dynasty and the Macerata heats will be in honour the family.

Lodovico Scarfiotti was born in Turin (his grandfather was the first president and one of the nine founders of the Fiat automobile company) but he lived most of his life in Macerata province, racing from an early age, he went on to win the Le Mans 24 race in 1962, his factory Ferrari achieved an average speed of 117.99 miles per hour over a distance of 2,832 miles (4,558 km). 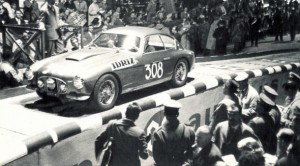 Ludovico became a Formula One driver for Ferrari in 1962, alongside John Surtees and Scarfiotti had a successful career that included becoming the first Italian in fifteen years to win the Italian Grand Prix when he drove his Ferrari to a track record speed of 136.7 mph (220.0 km/h) at the 1966 event. At the time of writing is the last Italian to win the race. 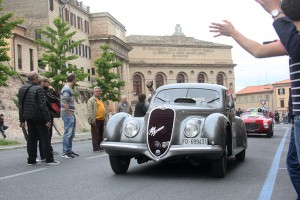 y off the Rossfeldstrasse track and catapulted ten yards down a tree-covered slope. The Porsche hung in the trees before Scarfiotti fell from the cockpit and died from his injuries.

His father Eng. Luigi Scarfiotti, took part in eight Millemiglia races from 1928 to 1938, driving Lancia, Alfa Romeo and Maserati cars and winning important results: third overall in ’32, in ’33 fifth, sixth and seventh in ’31 in ’28. 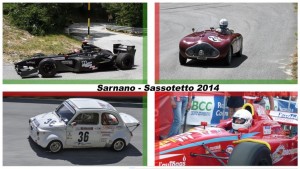 The 2016 Mille Miglia will be a further opportunity for Macerata to honour the Scarfiotti family. They also dedicate the annual hill climb time trial from Sarnano to Sassotetto to the family.

The Sarnano-Sassotetto Trofeo Scarfiotti has been run since 1969 and, like Millemiglia, draws cars in a variety of categories, their drivers and teams plus many enthusiastic spectators to this stunningly beautiful part of Italy. This year’s Scarfiotti hill climb takes place in Sarnano from 28-30 May.

Come and watch this year’s races 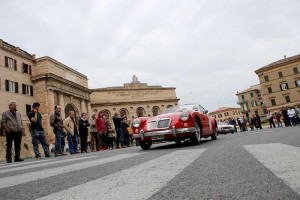 On May 20 Macerata province will host the traveling museum of the Mille Miglia, an event that has no parallel in the field of industrial heritage, historical, sporty design.

If you are a fan of cars, style, panache and wonderful landscapes then you really need to come and see these vehicles perform on the windy roads that dissect this magnificent part of the Italian peninsular. Alternatively, come for the hill climb race from 30 April- 1 May.

There’s plenty of great accommodation at Villa San Raffaello, superb restaurants, bars and the Marchegiani people are warm and hospitable.