A network of historic caves dating back to the Picene Tribe, The Romans, The Knights Templar & used as refuge during WW2 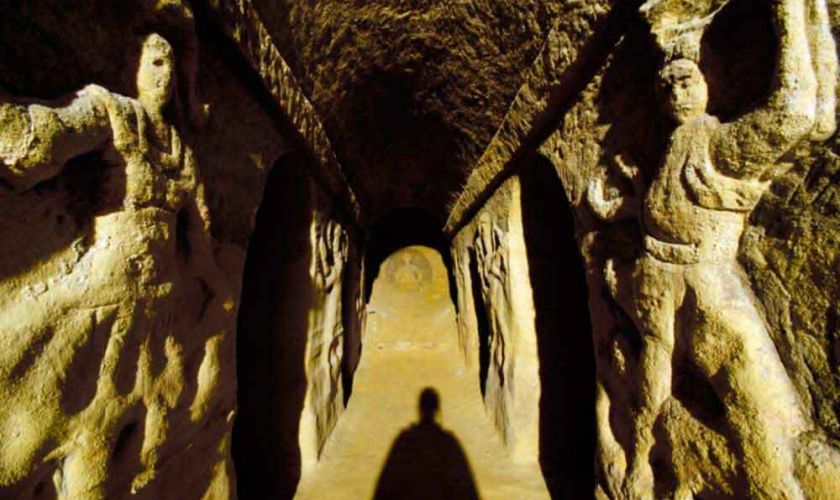 Really want to get off the beaten track whilst on holiday in Le Marche? then you need to be Going Underground!

About 2,500 years ago the Piceni people began excavating the hills inland from the Conero Riviera at Osimo near Ancona. They dug deep into the sandstone to defend themselves, for water, to store goods,  to live, to survive and thrive.

Ancient Italian civilisation under our feet

This incredible network of caves has now been reopened to the public, despite part being under private ownership. The caves document the ancient Piceni, Roman and medieval civilisation and culture, their habitation, paganism, religion and include captivating carvings and symbols! 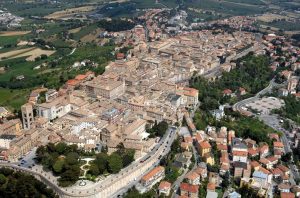 Osimo itself is a beautiful medieval town in Central Western Le Marche. However, from the town’s lovely Piazza and streets you have no idea of what lies beneath. Enter the magical underground other world of Osimo and you will be enchanted by 9 kilometres of mystical ancient twisting multi-layered tunnels.

A city below the city of Osimo, these caves and grottos were allegedly home to secret societies, who used the caves for their initiation rights. Later the tunnels were used by monks and evidence of wine storage still exists. More recently, the caves were used during World War 2 WW2 to hide and to treat the injured.

The caves include th 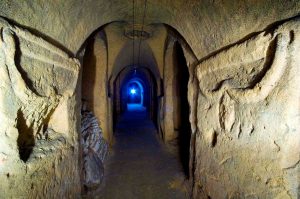 e Grotte di Palazzo Campana, with its strange carvings that date back to the Knights Templar and include Maltese crosses, Rosicrucian and Pagan symbols, carved by Celtic Druids. The tunnels below Palazzo Campana are one of the most mystical places in the whole of Italy.

The caves are a constant 12-13C and a light jumper and robust shoes are recommended. There are 4 cave networks and the duration of the itinerary is 40-45 minutes per cave network.

You can request and book visits from Tuesday to Friday. 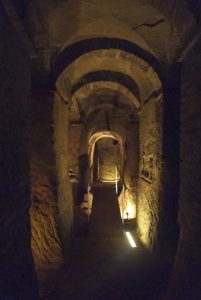 In the elegant “Fregonara Gallo Building” and through a nondescript doorway you will enter the subterranean world of  Grotte di Via Dante. The first level sottoterra has copper wine barrels and another staircase that descends into the darkness below. The tunnels stretch below some of the towns grandest palazzi, and conceal ancient carvings in recesses and on vaulted walls .

Many of these carvings are from secret societies such as the Carbonari and Freemasons; probably because the rich inhabitants of the palaces at ground level such as Count Cesare Gallo were members. Other carvings include pagan gods and latterly Christian. The Second World War turned these caves into air-raid shelters and there are many engravings from the local Italian population who sought refuge in those troubled times. 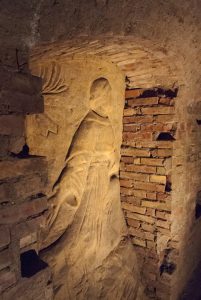 The underground city almost mirrors Osimo above. The Grotte del Cantinone is accessed from the local tourist office where you take stairs down below the church of St. Joseph of Cupertino. This set of tunnels is noteworthy for the crosses and religious symbolism by Franciscan monks. These bas-relief carvings and sculptures vary in the degrees of elaboration. Some symbolise sanctity and other flowers, there are others with hand carved cherubs, saints and angels. Many are naïve and simple but are more powerful for this roughness.

Excavations show that the tunnels were originally built around 2000 years ago and were widened during the Middle Ages. The Franciscan monks came here for silent retreat and to pray, away from the hustle and bustle of the city above. .

Guided visits need to be booked in advance and are available upon request for groups of 15 people.

The Hypogeum under Palazzo Hercolani Fava Simonetti is unique, it contains the one of the best preserved symbols in Italy. It is said that the Templar knights used the cave to mark a holy place. Between the 8 tipped crosses there is a  brick “patente cross” inset into the sandstone. The pathways and caves are probably related to the Jerusalemites and Hospitallers of Malta, orders descended from the Knights Templar; which included members of the Sinibaldi Simonetti family who were residents in the buildings above.

Simonetti’s cave is private proprerty and is unlit so we recommend that you bringa torch. 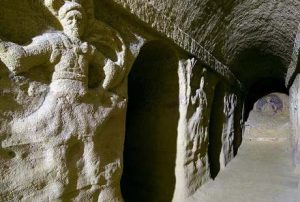 Descend into the cellar of Palazzo Leopardi and you can access Grotte Riccioni, one of the most interesting and best preserved caves in Osimo.

The cave is not nearly as extensive as others but is noteworthy as it has a very unusual star-shaped construction, many Templar symbols and early  bas-relief sculpture. The grotto was used in medieval times as a Templar Domus or main meeting point and it definitely invokes the feeling of mystery and secrecy under which the Knights operated. Each sandstone niche contains a seat and you will find a recess that was home to the watchmanwhilst on vigil.

The cave is property of the Riccioni family and  has no artificial light, as a result we would recommend bringing a torch.”