Cultural festivals on your villa holiday in Italy 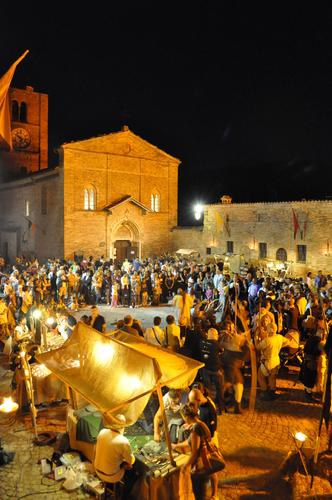 Le Marche hosts ‘festas’ or outdoor celebrations, games, concerts and dancing most weekends from spring to Christmas. During the summer these also occur on most weekdays as neighbouring villages compete in throwing the best party.
The common theme is a Marche festa that allows the visitor to sample local produce, food and wines. The following are a taste of what is available in some of the towns near to our Villa but, for detailed information on the numerous events please visit the Macerata province tourist site, the Marche tourism site, or buy the Corriere Proposte in the local tabacchi (newsagents).

Macerata Opera at the Sferisterio

Macerata is famous for its impressive Opera house the Sferisterio, an enormous open air theatre buit in 1819 with wonderful neo classical columns. Every year it hosts some of the best opera stars in Italy for its summer season.

The theme each year is different, for instance the theme for 2009’s Macerata opera season was “L’inganno” or deceit and includes Puccini’s Madame Butterfly, Verdi’s La Traviata, Mozart’s Don Giovanni and La Malentendu by Albert Camus. Performances take place at the grand Sferisterio and at the glorious Macerata Teatro Lauri.

Usually there is a date when the stars perform at the Roman Amphitheatre at nearby Urbisaglia. Urbisaglia itself has a short opera season in the Roman Ruins with its own players which culminates in the final night when a roman banquet is held. Tickets available from the box office or on-line via Vivaticket 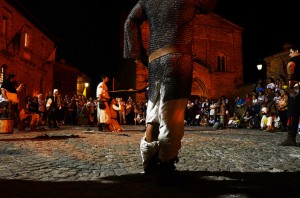 During the weeks leading up to 15 August (Ferragosto) the medieval Centro Storico is home to Castrum Sarnani a historical festa and pageant where fire eaters, jugglers, belly dancers, sword fighters, minstrels and artists roam the cobbled streets and piazzas that host theatrical and musical performances and a number of different bars and tavernas.

Ancient cantinas in the 15th century basements of Sarnano houses are opened to house artisans who recreate the ancient crafts and traditions of the Marche region.

A mint is set up to produce Sarnano denari the currency in use during the festival, wool is spun, blacksmiths produce weaponry, oil and bread is produced. In short it is a feast for the senses and a truly magical experience to bring back from you holiday in Italy.

Castrum Sarnani' is a celebration and re-creation of medieval life, industry, activity, food and music put on by Sarnano locals which was truly memorable. It felt like you had been time-warped back to the medieval era

A medieval Le Marche festa that takes place on the first Sunday of August in Caldarola, where you can sample local wines and dishes and watch and join in ancient games including archery, “giostra deli anello” and “corsa alla papera”. 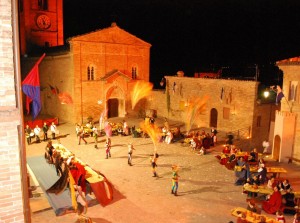 A Le Marche Festa set in the late 15th© which takes place between the first and second weeks of May in lovely Camerino and features food, wine and games. The main events are the Giostra della Quintana, Corsa all’Anello, Corsa alla spada where competitors race up the town’s wonderful steep alleys and streets.

This Le Marche festa is set in the middle of the 15th© and takes place in the period between the end of August and the first week in September. It includes a procession of about 500 people in typical costume and the giostra del saraceno (a jousting game played on horseback, typical of medieval and renaissance periods, in which knights tried to lance the puppet of an ugly woman). 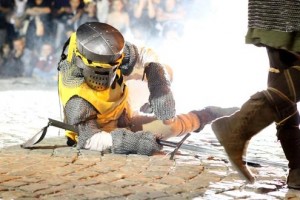 A costumed Le Marche festa set at the beginning of the Roman Empire (I century AD). It takes place in Matellica at the end of August and the start of September; it finishes on the first Sunday of September with processions and pageants including the fascinating Corsa delle Bighe.

This Le Marche festa recreates life in Mogliano in the Macerata province of Marche in the mid 700’s. The show begins at the end of June and ends on the first Sunday of July, with a procession of about 300 and the Corsa della Bandiera.

Historic Le Marche Festa depicting life in the late 8th century. It takes place in Porto Recanati in August and finishes on the third Saturday of August with the procession of the “sciabbegotti con Ie coffe”. It features a race in which the competitors carry wicker baskets full of fish from the sea to the market as quickly as possible, without dropping so much as a sprat.

A medieval Le Marche festa that takes place in the period of ferragosto (the August bank holiday) in the perfectly restored medieval setting of San Ginesio. On 13 August, the Palio della Pacca takes place, followed by the Palio degli Anelli on 15 August. 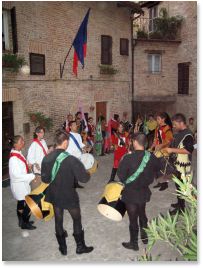 An historic Le Marche festa or pageant set in 15th century San Severino; which takes place in June and finishes on the third Saturday of the month with competitions of Tiro alla Fune (tug-of-war), Corsa dei Sacchi (sack races) and Corsa delle Tom.

An historic Le Marche Festa with a military pageant recreating the Napoleonic period (the peace treaty with Napoleon was signed here). The display takes place in Tolentino’s Castello della Rancia on the first Sunday of May, with processions and military exercises.

Set in the 1400’s celebrating the life of Saint Nicolas. This Le Marche Festa takes place between the last week in August and the first week in September with games food & wine in the square. At the same time in Tolentino the festa ‘Sul Ponte del Diavolo’ takes place with displays of craft workshops, dance, archery and jousting on the Roman bridge.

An ancient game played against the fortified walls of the medieval town by teams of two players, dressed in medieval garb and armed with spiky wooden bracelets, hit a large leather ball over a high net, using angles off the wall to good effect. Each year the games and a big le marche festa are celebrated on the first Sunday of August in Treia, following ten days of celebration that begin on the Friday preceding the last Sunday of July.

One of the grandest of the Le Marche Festas, the Giostra della Quintana is Medieval Jousting based on a 14th© version which took place in honour of Saint Emidio. Six riders test their horsemanship. It Takes place in Ascoli Piceno on the first Sunday in August.

A favourite amongst the Marche festas. It sprawls around the medieval town of Loro Piceno, celebrating Vino Cotto or cooked wine, which is a speciality of the area and is fortified, slightly smoky and sweet. The Le Marche festa itself consists of market stalls, great varieties of food and wines, fireworks and always at least 4 musical stages where the music ranges from ska to jazz. There always seems to be a party going on at the uppermost music stage.

On the final weekend in October you should try to visit this fantastic Le Marche Festa; a food festival in Montemonaco in the heart of the Sibillini Mountains of Le Marche. Many small local food and wine producers have stalls and there’s normally a band playing near the main piazza where visitors are plied with free, hot spiced wine.

The San Severino Blues festival arches the spectrum between jazz, blues and rock and has some great artists playing fantastic historic venues in San Severino and around Le Marche. Recent guests have included Joe Jackson and Patti Smith.

July and Christmas sees Perugia host the Umbria Jazz festivals; which also take in a bit of indie and some funk or disco. Set in a wonderful medieval town and just over an hour from the villa, there are normally 4 or 5 stages hosting many bands every night. 2008 saw artists from Alicia Keys to Joao Gilberto and REM to the Editors.

The middle of June sees the Marche music festival at Tolentino’s Castello della Rancia. This Le Marche festa is set in the trees behind the beautifully preserved castle, and serves up excellent food, wines, bands and DJs every night.

This small town plays host to one of July’s best Le Marche festas, the “Colmurano Buskers Festival“, hosts a multitude of acoustic music sets being played from a wide range of international musicians and plenty of street entertainment for all ages