Borgo in Gioco- a Le Marche Festa of traditional games

Do you ever reminisce about the innocence of childhood……racing in that box cart, shinning up trees or getting your catapult out.

Personally, the latter subject still irks my dad. He had confiscated my catapult at my uncle Gordon’s just completed 1970s designer home, with its alla moda glass walls. He said “don’t ever fire towards the house”, he took aim, fired away from the house, hit the cement mixer and  the ricochet smashed the ridiculously expensive glass. Oh how we, with the exception of my Dad and Uncle Gordon, laughed!. 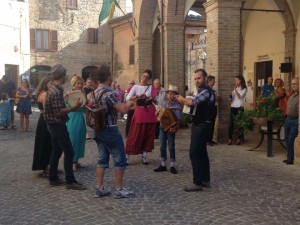 With the backdrop of the nearby Sibillini Mountains , the sun drenched terracotta walls of the medieval village, the sound of wandering minstrels and the delicious smells wafting from a couple of pop up Osteria restaurants creating a unique atmosphere.

The historic Piazzas and lanes were alive with whoops of joy and laughter. At the entrance  to the village, an old loggia housed an exhibition of traditional toys and games, outside were demonstrations of card games, a Burrattinaio, or puppet show, sack races, a Go kart piste, wheel of fortune, hopscotch, catapulting (away from glass without cement mixers), archery and stilt walking. 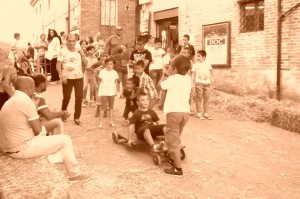 Sony and Nintendo really have a thing or two to learn from this enchanting community event . Its all very well  getting your mates up to your room for a game of Wii, but an imaginary bat and ball cannot replace real thing and besides a) you look daft playing wii and b) there are ways to have more fun jumping up and down in your bedroom

Among the more unusual traditional Italian games were

This involves a row of terracotta pots being hung from a line about 10 feet in the air.Contestants are blindfolded and given a long stick, they are then guided by a teammates and then allowed a couple of whacks to try and break the pot. If successful, they are showered with broken pottery. 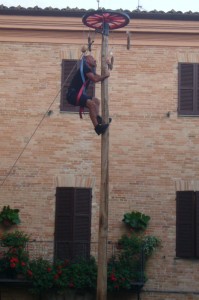