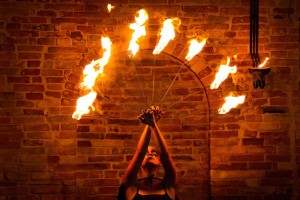 One of the highlights of the Le Marche festa calender, Castrum Sarnani recaptures the charm of medieval Sarnano through culture, tastes, sights and sounds that characterized this beautiful, ancient village in the Middle Ages.
Visitors to Sarnano’s Centro Storico will experience a real step back in time as Piazzas, streets and alleys are brought alive by jesters, dancers, knights, fire eaters, sword fighters, historic street theatre stilt walkers and and juggling.

Modern day Sarnano preserves the history of the Middle Ages and the town’s grandeur has won it the accolade “one of Italy’s most beautiful villages.
The festa will host 5 pop up tavernas, situated in the wonderful historic centre, where you can indulge in delicious medieval dishes and local wines. Guests are served according to the customs of the middle ages, adding to the magical and enchanting atmosphere.

The visitor becomes an inhabitant of this small medieval village once they convert their euro with the ancient denari coin minted especially for the occasion, and on some nights you can exchange your attire for a medieval costume and attend a banquet.

The “Palio del Serafino”, is one of the oldest historical re-enactments of Marche performed for the first time in 1965. This year, the 750th anniversary of Sarnano, the Palio of Serafino will include tug of war, cut the trunk, climb the pole and the race with the pitcher.

The opening of Sarnano themed exhibitions, “Secret Sarnano”, “Fragments of the Palio of Serafino”.
The Taverna della Luna in Piazza Alta. will have Servants in medieval costumes, before and during the show, offering the “wanderers” some simple and tasty recipes of the past.

Aug. 5 17:00 The University of leisure present a lecture “from Meinhard to Brunforte” and notes to help understand the area and its history. Edited by Prof. Onorato Diamonte

Aug. 6 17:00 The University of leisure “Guided tour of the ruins of the Castle of Brunforte”. Edited by Prof. Fabrizio Fabrizi 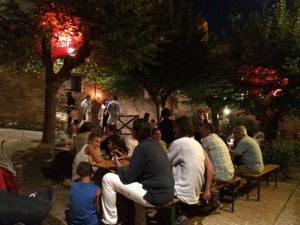 Historic food event. Open every Summer for thirty years “Taverna della Luna”, is on the upper balcony at the back of Piazza Alta, below the majestic Palazzo del Popolo. This alfresco medieval tavern, serves typical dishes from the middle ages.

Nothing is left to chance: the use of existing ingredients from “pre-Columbian” times, the use of terracotta plates and glasses and serving staff in period costume, all details are true to medieval times to ensure guests a historic experience. The guests will be entertained by performances from belly dancers and jugglers, by skilled and daring fire eaters and stilt walkers.

August 9, at 17 – Historical Parade and opening the entrance to the Castrum

Accompanied by the sound of the bell tower of the Palazzo del Popolo, the historic parade, preceded by the rhythms of the Group of Tamburini Serafino, it is a commemorative representation of the institutions and customs of the ancient City of Sarnano. Behind the banner depicting a seraph with six wings, historical coat of arms, the mayor with his wife, the Priors of the four districts, Ladies and gentlemen of the same will parade through the streets of the “castrum” escorted by the Captain of the People and valiant knights . The solemn blessing will give the official opening of Castrum Sarnani. 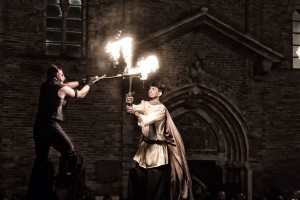 The Palio will include a historical processiob, music and juggling and the revival of the ancient and spectacular “games” that, since 1965, have made the “Serafino D’oro” and before the “Palio del Serafino” after one of the most sought pageants and follow in the region. This will include

• Race with the pitcher

9-12 August from 1700-24 – “Castrum Sarnani, the Middle Ages returns” arts and crafts in the historic center

The main event goes live. Walk through the arch of Porta Brunforte, and the village plunges into the atmosphere of its medieval past. Starting with the “cambio”, or “Mint” in which the visitor must change their Euros with the “denari”, needed to be able to eat or shop within the “Castrum”:

Continue along the alleys and steps of the village, alive with the sounds of medieval music, it comes to life through dance and fire eaters, fighting fencing ancient storytellers, strange characters of the time, entertainment with stilts and juggling.

Tourists can appreciate the artisans with ancient skills who expertly reproduce, Pots and ceramics, the basket maker, the herbalist, the gunsmith, the dealer, the candelmakker, the carpenter, the goldsmith, the surgeon, dyeing, leather, carding wool, the blacksmith and many others. The path winds through the streets until you reach Piazza Alta where they will play for the duration of the event animated shows, before easing away from the coast and via Leopardi.

In some areas you will experience special scenes of medieval life, such as the cave of torture, the Inquisition, the burning of witches and other recreational areas with ancient and strange medieval games.

For dinner, the visitor can choose to sit at the Tavern of the Moon, to eat a full meal, or stop for hospitality at one of the many bars and osterie, you can sample flame grilled meats, pastas, breads, cheeses and sweets, wine, beer or sip a glass of strong drink served in a crock by industrious monks who will demonstrate the ancient process of making beer.

Open every night “the Middle Ages of the children” where the young visitors of Castrum will be enrolled by entertainers who will clothe them in medieval garb and then engage in games of skill in the town center, the pursuit of vanishing Princess or of knighthood will be unforgettable moments for all the children who participate.

1800 pm “The historical Camp”, interesting talk and explanations about the use and customs of man-at-arms in 1200 by the company Griffin Scala in San Severino Marche.

Special banquets for each contrada (town district) to celebrate the closure of Catsrum Sarnani: dinner will be enlivened a unique and engaging with musicians and belly dancing performances with fire and medieval music.

Cultural activities: Exhibitions and guides in the historic center

The event Castrum Sarnani enriched year with the following: 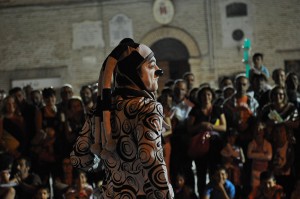 In the days fromAug. 9 to 12 from 17.00  to 19.00 of the association Tamburini Serafino organize guided tours to discover the treasures and the particularities of the historic center sarnanese.

Within the People’s Palace, from August 2, will be set up several thematic exhibitions, “Arcana, the secrets of Sarnano” a journey that traces the history of the town of Sarnano from more distant periods, the birth of the town (1265) until the present day.

Imago Sarnani, photo exhibition of the works that have participated in the photo contest on the event. Photo exhibition “Fragments of the Palio of Serafino”